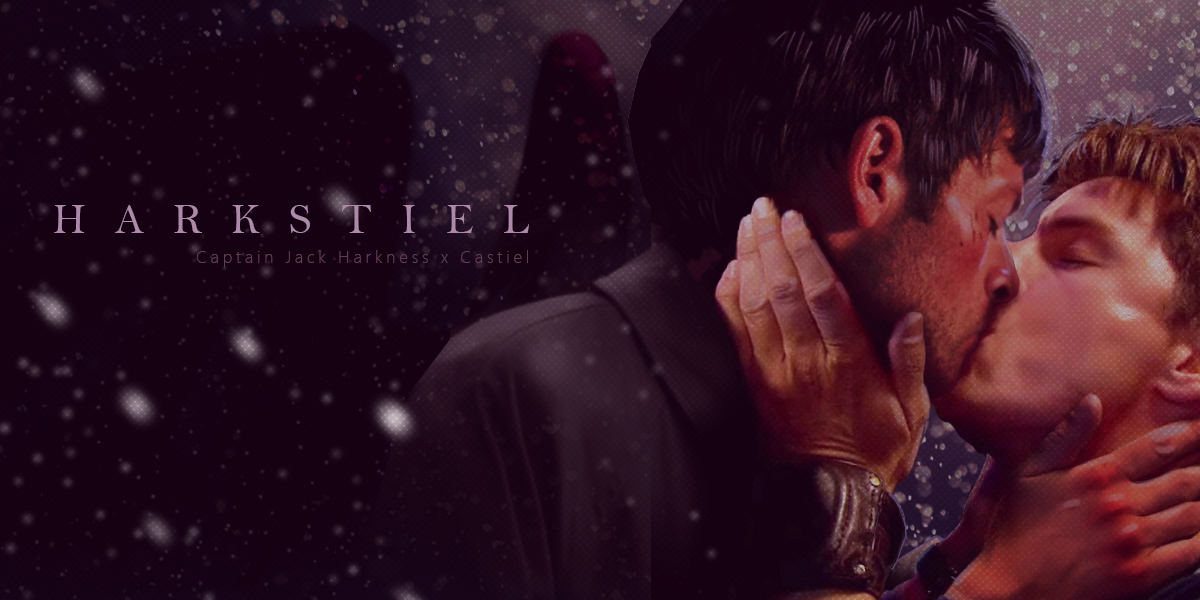 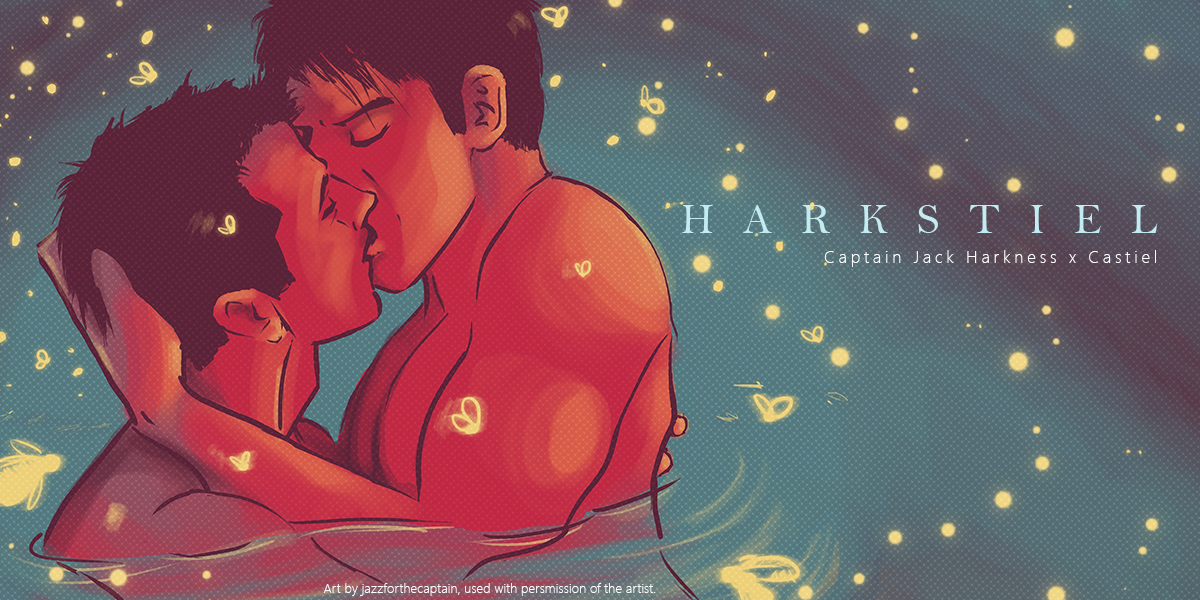 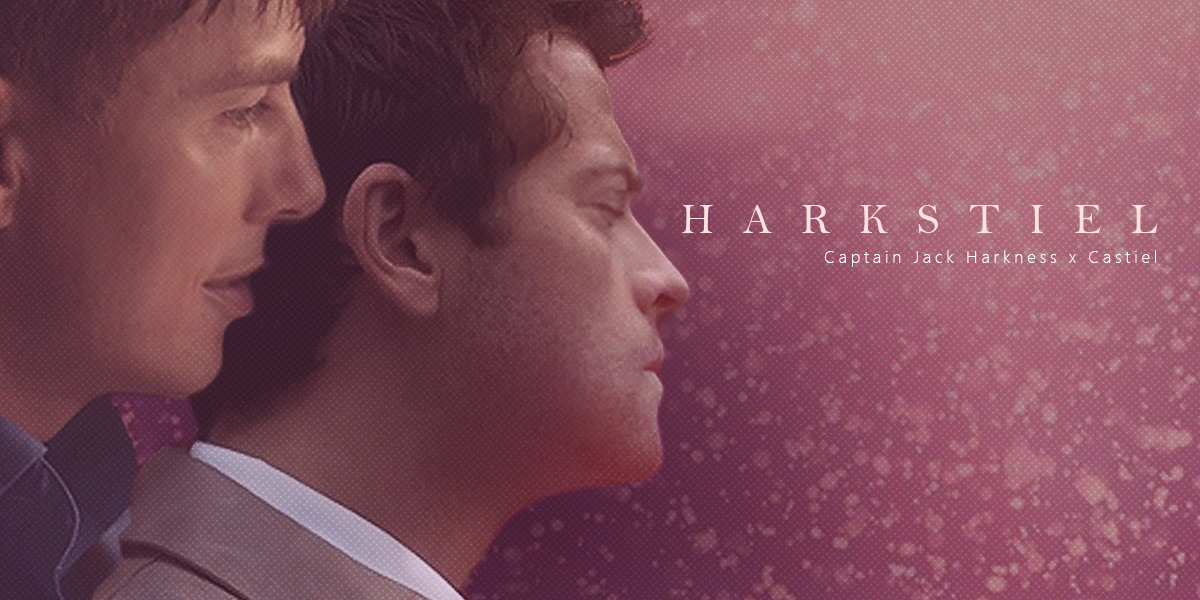 You must be wondering why this is here.

I'll spare you the drippy personal story; how this ship is a years-long love letter to my partner. You're not here for that. You're probably not even here because you like the ship - although if you are, hey ;). Chances are good that to you, this is the metaphorical equivalent of a roadside Victorian hair art museum. Who would make this stuff? Why would someone make this stuff? Who would care enough to curate it? WELL WONDER NO MORE.

The fictional relationship of one immortal spacefaring reformed coward and one occasionally immortal stubborn-ass wavelength of celestial intent is... weird, to be honest. Captain Jack Harkness (Torchwood) and Castiel (Supernatural) are characters from different television series, on different networks, airing in different time zones and on different hemispheres. The shows might have aired concurrently for a couple years, but that was well before I got involved. In the true spirit of the science fiction and paranormal genres, this relationship is purely speculative. There are no easy connections here, folks.

I mean, there are.

But you have to be curious.

And now you are, aren't you? Otherwise, what are you still doing here?

PART ONE: NOT YOUR MONSTER

You can find a lot of uses for an immortal human with an endless supply of future tech, or a being with flight, invisibility, telekinesis and paranormal strength. They know that. They know you know that. Castiel and Captain Jack Harkness have been used by anyone and everyone they've gotten attached to. If you're a fanfiction writer for either of their series, you've probably used them too. They make a great pathfinder, cutting a hole in anything - even the literal space-time continuum - to get your stalwart heroes out of trouble.

The problem with being as useful as they are, is that people tend to identify them by their usefulness. Their friends and relatives feel entitled to their help. To their abilities, and their compliance. When they refuse, or prioritize their own needs, suddenly their otherness is no longer waived. They become the enemy. The monster. Who wouldn't get tired of being asked, "What's the point of you, anyway?" What kind of people might they each become with the benefit of a little threshold of trust and loyalty? Given the right circumstances to earn a line of credit with one another, Castiel and Jack would quickly discover an empathetic ear. And (salty Supernatural fan here) you know, maybe Castiel would react positively a suggested course correction that didn't come off as a self-righteous rant or a threat. Hell, imagine the series if one of Castiel's allies had taken his cries for help seriously in Season 6. Or if one of Jack's allies could have lovingly called him out for playing the long game in 1965.

"[I'm a] man like you, out of his time, alone and scared." - Captain Jack Harkness

These two jerks are very, very old. They retain human aspects, but they're not human, and that otherness sets them apart from their shortlived Terran allies. Castiel is an entity whose existence and description is beyond the scope of language. He wears a human body to be safely perceived by his allies. That human body also grants Castiel camouflage. While he's in it, he seems human - if awkward. This camouflage works on his allies too, almost too well. Dean and Sam treat him conditionally as a human, until his powers remind them that he's not. Then, his otherness inspires fear and distrust.

Captain Jack Harkness is mostly human, with one hell of an immortal catch. The years of life given by the Heart of the TARDIS have been tough. With fully human sensibilities, Jack is forced to navigate the trauma of multiple deaths, violence and captivity for his otherness, immeasurable grief as his lovers, friends, family and colleagues die, and the existential ennui of being a man out of time. He has no control over continuing to live. He only knows that - for now - he can't die. The refinement and sharpening of that understanding over the years, along with a pessimistic view of cyclical human behavior, has resulted in some truly brutal decisions. Jack no longer considers himself human. He performs for the sake of his colleagues and the occasional lover, but has grown more and more detached as time goes on. When he opens up about his unique situation, his human relationships almost always suffer. Worse yet, on more than one occasion his trust has been betrayed as a wary or jaded human companion sees him as a potential research project, tool, or weapon.

Both Castiel and Captain Jack Harkness deserve a partner who can see and honor their differences from humanity without flinching. Who can acknowledge the dark and the sometimes cataclysmic mistakes without judgment. Who can recognize the gifts and talents they possess and share the experience of being in - but never truly part of - the world. Enough with narratives full of Teachable Moments for these poor lonely sods. They deserve an ally who won't back away.

"You can never really beat Death, never escape it. It's always in the shadows, waiting." - Captain Jack Harkness

Castiel and Jack have seen the lives of loved ones used as leverage. They've seen family and friends die. Many, many, many friends. For them, loving humans comes with a certainty of grief, as every human they love will leave them behind. Jack's coping methods keep him isolated. Castiel has suffered a significant volume of loss in a very short time; he turns blame inward as he struggles for some illusion of control. While their partnership wouldn't preclude the possibility of loss, their chances of survival are higher. Beyond the physical dangers, both characters are capable of seeing the bigger picture and the long-term consequences of decisions. Once they realize this, their value to one another may elevate even further. No human with an average of eighty-five years on this rock can really get them. The constant struggle to adapt. The decades and centuries that blur, erasing the names of great loves and the memories of great loss. The decreasing value of life. The depression as humanity repeats its own worst history, as it fails again and again to see the long-term consequences of its decisions. The paths they could take are fascinating. Will they be the other's conscience, their crutch, their enabler? Is it their destiny to be curious spacefaring explorers, or cold and insular gods? Good as they might be for one another, their benefit might well be the universe's bane.

"...all fifteen men were dead. They'd been suffocated. My squad. Men I was responsible for." - Captain Jack Harkness

Soldiers and commanders in their own right, Castiel and Jack have seen their share of action. They both come from an extensive military history, with a laundry list of ill-fated decisions and a jaundiced view of hierarchy and unquestioned loyalty. Their separate histories have made them doubt their own leadership skills and refuse to take orders from anyone but a select few. Two solo acts trying to survive together would make for compelling storytelling, but neither of them are inclined to be petty or cruel without cause. They're capable of recognizing the skills of others and leaning into them, which over time (and with inevitable power struggles) could result in a tight bond of trust. Or the relationship equivalent of a nuclear wasteland - but getting there is half the fun. If anyone can teach them the value of trust just through the consequences of sheer failure to trust - it's each other.

PART FIVE: HONOR THE PAST

"Did you see him? Did you see Ianto? You would've liked him...Or not. You would've been jealous. Is that why you never approached me? Or maybe you did approach me...some old guy asking for directions, and I would've looked right through you." - Captain Jack Harkness

"The point is that they were here at all and you got to know them. When they're gone, it will hurt, but that hurt will remind you of how much you loved them." - Castiel

Just for clarity, I'm not here to sell you a ship that's competing with yours. It can if that's something you're into, but one of the fundamental parts of this relationship is that love comes in a vast array of shades, and for Jack and Castiel, it can come and go at any time. As both individuals perceive time differently than their possible, or canon, mortal paramours, it's not a stretch to0 far to posit that they perceive and prioritize relationships within that framework of longevity. They might find comfort in a companion who can empathize with their losses, who can honor the great loves of their past, and make room for new relationships without jealousy. This ship will outlive pretty much any other ship, barring a twist of Fate or stupidity, which means there's room for other loves. Castiel and Jack's love wouldn't, can't be possessive. I mean it can if you like your ships toxic, no judgment bro. There's plenty of capacity for fascination, obsession and pursuit within each of these characters and without a prexisting canon to set the stage, you can basically pick the dynamics of their first meeting to determine just how toxic it gets. But my point is, if you're into their happy ending, even their happy-for-now, it doesn't need to come at the expense of whatever ships you might already enjoy for them. Not only can this ship co-exist with or come long after those loves, it will absolutely honor them. Jack and Castiel can be disrespectful as fuck, but not about bonds of love.

Speculative is an understatement.